This is me with my Mom, Donna and my Daddy, Ivan.  I don’t remember that day.  I know I was young and it is unrealistic to think that I should remember.  But, I do have a bad memory.  I am serious, it’s so bad.  I started having seizures when I was about 40.  They were small epileptic seizures and you wouldn’t even know I was having one except that I would say something like, “Shit, here it comes”.  I am pretty sure that they take a bit of my memory away every time I have one.  I only have 4-10 a year.  I mention this because I don’t have much in the way of memories of my Daddy.  He and Mom got married when she was 17.  I was born 8 months later.  Being the first, there are a lot of pictures of me.  Not so many of Daddy and me, though.  They had 6 kids in 10 years and then Daddy died when the baby was 2 and I was 12.  I have memories of childhood and not too many of them include my parents.  Daddy worked and Mom dealt with 6 kids.  They were social people and had many get togethers with their friends.  I remember getting up on Sunday mornings and eating the maraschino cherries out of the glasses that were still on the table or on the counter near the sink.  There was always a lot of laughter and we watched some of the stuff from hidden spots or listened from behind closed doors.  My Daddy was a popular guy and at his funeral I heard so many men say, “Ivy, was my best friend”.  I can’t say he was a bad Dad or a good one, I don’t remember. I know I wasn’t abused, rarely spanked if ever.  I just wasn’t Daddy’s little girl.  I am pretty sure he didn’t spend a lot of time with us.  We lived in a medium sized city and this was back in the 50’s and 60’s when it was okay to let your kids leave in the morning and not see them until sunset.  We did, of course, come in for lunch and have sugar sandwiches or PBJs and see Mom and one of the many sisters or brothers.  Daddy was working.  Possibly my brother Jerry had the best relationship with him out of all of us.  He was 7 when Daddy died.  He said to me a couple years ago that he lost his best friend when Daddy died but nobody paid attention to that.  Thinking back I feel bad for him now.

My Mom was 30 when she lost my Daddy.  It was really hard on her but I don’t remember that she almost had a nervous breakdown.  I think she ended up in the hospital.  I do remember that we moved back to the south side of town and I was in junior high.  I had some of my old friends to hang with and life was fun.  My Uncle was around some and he was so cool and had a lot of good looking guys with him.  He taught me how to dance and made my Mom laugh a lot.  Mom eventually dated a guy who was 5 years younger than her.  They didn’t date very long and soon they told us they were getting married.  Not only were we getting a new father but we were moving to a small town I never heard of.  It was only 80 miles away but it might as well have been 500 miles.  My life was over.  I had a boyfriend, I was a big shot ninth grader in a middle school, and I had a life.  Actually I was never a big shot but I was a ninth grader and soon became a lowly freshman in a high school.  I was always shy in school but once we moved I didn’t know how I was going to make it.  Thank goodness for Sandy, who grabbed me and made me part of her group.  I became popular, at least with some.  Not cheerleader popular or smart student popular, I was one of the others.

Dad was not Dad yet.  I called him Wally and didn’t know how to call him anything else.  Dad just didn’t sound right.  I was 14 and a bit of a smart ass but not too bad.  Wally was really a great person and loved my Mom so much, almost as much as she loved him.  They were newlyweds!  Sounds great, huh?  Here’s the kicker, they were newlyweds with 6 kids and soon after that, there were 7 of us.  They were also very social.  My Mom and Wally were either at the bars or parties almost every weekend.  Don’t get me wrong, they were great people and wonderful parents.  They just thought we were okay by ourselves for a few hours, too often.  I was in charge, so I would leave and put my sister in charge.  As we got older she would also leave and put the next sister in charge.  I did not do really well in school and got in trouble a couple times.  My parents were just too busy with themselves, work, and socializing to see the little stuff that was happening with their kids.  I am sure my siblings have different memories and hopefully better ones.   They eventually had one more child to make it an even 8.  There were 5 girls, 3 boys and I never thought of us as half siblings, we were just one big happy family.

I moved out when I was 18 and only moved back once.  I eventually started calling Wally, Dad.  It truly was difficult to do it.  I am assuming it was difficult for us older girls and probably not so much for the boys.  I moved away, got married and had my son.  I talked to my Mom a lot, Dad not so much as he was not real comfortable on the phone.  That was fine and worked for me.

I lived within a couple hours of them for about 10 years.  When we went to visit them, it was always fun and filled with laughter and at night, alcohol.  We grew up in a world of beer, martinis and old fashions.  The six oldest learned how to drink very well.  None of us are alcoholics and we are all friendly drunks who like to sing.  As we got older the drinking diminished with the girls, but the boys will be boys.

I moved to California 22 years ago and would come home once a year.  I called Mom a lot and sometimes got Dad to talk for a couple minutes.  Mom was diagnosed with lung cancer a few years ago and passed away in 2010.  I came home twice that year.  Once in January when she got really sick and then again a few months later when she died.  The January visit was great.  She ended up getting better and leaving the hospital but was in the entire week I was there.  I stayed at a hotel a few miles away from the hospital.  I was the first one to greet her in the morning and the last one to say goodnight.  We talked about God and life and death. She cried when she told me how ugly her body was.  Mom hated that Dad had to help her get dressed because he saw her.  She told me she was afraid to die.  She didn’t want to go; she didn’t want to leave Dad.  I remember hugging her when I left to fly home.  She had gotten so tiny.  I bent down and hugged her and said, “I love you Mummy”.  I don’t know why but I started calling her that a couple years before.  We held each other and cried.  I think we both knew it was probably the last time together until we met again in Heaven.  She died two months later in the doctor’s office, all alone.  She was a wonderful, sweet woman.  I don’t think there was anyone that didn’t like her.  I miss talking to her.

The day of her memorial service I remember Dad asking if it was okay if he called me.  I think he was afraid that with Mom gone, we wouldn’t be close anymore.  Broke my heart.  We did get on the phone once in a while.  He was a little uncomfortable but has gotten pretty good at it.

The following year I left my husband and my life in California.  I live about 2 hours from Dad plus a ferry ride across to the Island.  I’ve spent a lot of time talking to him during some of my visits.  He loved my Mom and was a devoted husband.  He’s a great man, always was.  He’s in a relationship with another woman now.  It’s his life and he deserves to be happy.  I support him but not everyone does.

He’s been my Dad for 44 years and he loved my Mom like crazy.  I never heard them fight.  He was her knight in shining armor and I will always love him for that. 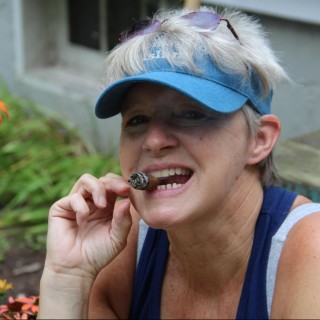